WikiLists
Register
Don't have an account?
Sign In
Advertisement
in: Lists of fictional villains, The Lion King Villains, Dinsye Villains,
and 4 more 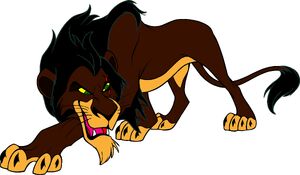 Makuta schmoopatta or whatever the heck you're supposed to say when you mention this film. I've never seen it. This was right around the time I became jaded on the whole Disney-Machine (visit the corporate headquarters then read George Orwell's 1984... you'll get what I mean... 'nuff said). Anywho, just when I need a hand with this fellow, along comes Loneheart!!! Scar was the brother of Mufasa. Mufasa was the Pride leader (King) of the Pride lands. Scar would have been king, but was weaker than his brother and lions rule by strength. When Simba is born, it seems all hope for Scar to become king is lost. But Scar is smarter than Mufasa and plots to kill his brother and nephew (Simba, the hero) with the aid of hyenas and a stampede of buffalo. Mufasa dies and Simba is chased into the desert by the hyenas. Scar becomes king and invites the hyenas into the pride lands. Eventually Simba returns and there is a huge battle between the lions, Simba and his friends and Scar and the hyenas. Scar loses the battle and is devoured by the hyenas after trying to put the blame for everything on them. Voiced by Jeremy Irons, Scar is one of the old school Disney villains with the best in modern sophistication and dry, witty dialogue. He has a great song and a grisly off-camera death scene. And unlike many villains he starts off with nothing and gets everything he wants- before he gets everything he deserves. Thanks again, Loneheart!

Community content is available under CC-BY-SA unless otherwise noted.