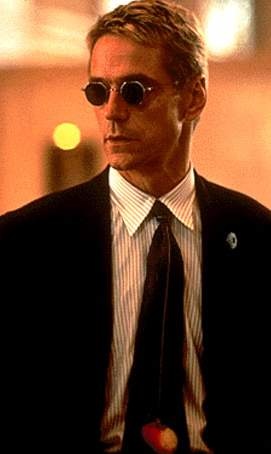 It seemed to be a plan driven by personal revenge. Det. John McClane (Bruce Willis) was singled out to perform tricks for a maniac terrorist, and the NYPD and FBI would soon discover that Simon Gruber (Jeremy Irons) was the man behind it all. The brother of the late Hans Gruber, Simon came to New York with a serious grudge against the guy who dropped his bro out of the Nakatomi Building during the memorable 1988 Xmas Party. Or, at least, that's what everyone was meant to believe. Just like his brother, as he was threatening innocent people with one hand, he was busy robbing them with the other. As the feds and NYPD were running around looking for bombs, Gruber and his gang were robbing Wall Street, making off with tons of gold. All the while, Simon would play his demented game of "Simon Says," leading McClane all over town, wasting his time with brain teasers and nursery rhymes. Instead of just killing McClane, Simon wanted to string him along in an attempt to embarrass him and the rest of the police department. As McClane got closer to uncovering their plans, Simon's gang began to get tired of Simon and his games. Simon wouldn't give up, though, and eventually had McClane and the gold in his grasp. Were it not for his recurring migraines, Simon and his gang might have gotten away with everything. Good thing John McClane is a Detective, and always on duty. Simon Gruber had a great criminal mind like his brother, and wasn't afraid to slip on a disguise or fight and shoot his way through adversaries. His greed and physical infirmities would lead him to ruin, however, and just like Hans, Simon would find himself on the losing end of a fight with John McClane.

Retrieved from "https://list.fandom.com/wiki/Simon_Gruber?oldid=95953"
Community content is available under CC-BY-SA unless otherwise noted.